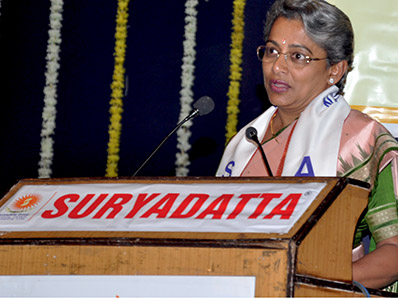 The automobile industry accounts for 22 per cent of the country's manufacturing gross domestic product (GDP). The auto sector is one of the biggest job creators, both directly and indirectly. It is estimated that every job created in an auto company leads to three to five indirect ancillary jobs. With the increasing growth in demand on back of rising income, expanding middle class and young population base, in addition to a large pool of skilled manpower and growing technology, will propel India to be among the World's top five auto-producers.
India is expected to become a major automobile manufacturing hub and the third largest market for automobiles by 2020.

The overall fast moving consumer goods (FMCG) market is expected to increase at a rapid pace to touch Rs. 70,000 Crores in the period 2012-2020, with the rural FMCG market anticipated to increase more rapidly to Rs. 65,000 during 2012-2025.
There is a lot of scope for growth in the FMCG sector from rural markets with consumption expected to grow in these areas as penetration of brands increases. Also, with rising per capita income, the FMCG sector is anticipated to witness some major growth. Government initiative of relaxation of license rules and approval of 51 percent foreign direct investment (FDI) in multi-brand and 100 percent in single brand retail are some of the major growth drivers.

India is expected to become the fifth largest consumer durables market in the World by 2025. Urban markets account for about 65 percent of total revenues in the consumer durables sector in the country. The rural and semi-urban markets are likely to contribute a majority of consumer sales as the rural consumer durables market is growing at the compound annual growth rate (CAGR) of 25 percent.
The Government of India has increased liberalisation which has favoured foreign direct investments (FDI) in this sector. The sector has great careers for Management graduates and hence we invite professionals from the sector to impart training to our students.

End to end Supply Chain Management includes all functions right from procurement to distribution. The function is gaining more and more importance in today’s era where customer expectations are ever growing in terms of delivery time and cost. In the e-commerce era, the back bone of entire business is SCM, both in domestic as well as in international business scenario. The export & import basics, procedures and documentation is taught through a systematic workshop by experts from the industry.

India has a diversified financial sector, which is undergoing rapid expansion. The sector comprises commercial banks, insurance companies, non-banking financial companies, co-operatives, pension funds, mutual funds and other smaller financial entities.
India's services sector has always served the country's economy well, accounting for about 57 per cent of the gross domestic product (GDP). In this regard, the financial services sector has been an important contributor. At present, India is undoubtedly one of the world's most vibrant capital markets. Challenges remain, but the future of the sector looks extremely lucrative as on date.

The banking sector in India is on a growing trend. It has vastly benefitted from the surge in disposable income of individuals in the country. There has also been a noticeable upsurge in transactions through ATMs, and also internet and mobile banking. Consequently, the different banks, viz public, private and foreign banks have invested considerably to increase their banking network and thus, their customer reach.

The banking industry in India has the potential to become the fifth largest banking industry in the world by 2020 and third largest by 2025 according to a KPMG-CII report. Over the next decade, the banking sector is projected to create up to two million new jobs, driven by the efforts of the RBI and the Government of India to integrate financial services into rural areas. Also, the traditional way of operations will slowly give way to modern technology.
Both, retail banking as well as investment banking are one of most sought domain to build a successful career. It helps to boost the economy of the commercial sections of the society by creating more opportunity for both, the employed and unemployed ones to raise capital and make profit.

Globally, the Indian pharmaceutical industry is ranked third largest in volume terms and 10th largest in value terms. The sector is highly knowledge-based and its steady growth is positively affecting the Indian economy. The organized nature of the Indian pharmaceutical industry is attracting several companies that are finding it viable to increase their operations in the country.
Indian pharma companies have a large chunk of their revenues coming from exports. While some are focusing on the generics market in the US, Europe and semi-regulated markets, others are turning their attention to custom manufacturing for innovator companies. Biopharmaceuticals is also increasingly becoming an area of interest given the complexity in manufacture and limited competition.

The Indian real estate sector is one of the most globally recognized sectors. In the country, it is the second largest employer after agriculture and is slated to grow at 30 per cent over the next decade. It comprises four sub sectors - housing, retail, hospitality, and commercial. The growth of this sector is well complemented by the growth of the corporate environment and the demand for office space as well as urban and semi-urban accommodations.
According to a study by ICRA, the construction industry ranks third among the 14 major sectors in terms of direct, indirect and induced effects in all sectors of the economy.

The Indian retail industry is one of the most vibrant industries in the country. It is currently ranked at 20th position among the top 30 developing countries identified by Management consulting firms. India remains an appealing, long-term retail destination for several reasons and its demography. India's retail market is likely to touch a whopping Rs 47000 Crores by next year. With the online medium of retail gaining more and more acceptance, there is a tremendous growth opportunity for retail companies, both domestic and international.

Tourism and hospitality, a key sector of the Indian economy, plays a key role in the growth of Brand India and accounts for around 12 per cent of the total employment in India. Globally, tourism ranks fifth as an export category. The tourism and hospitality sector in India is highly optimistic with a large number of hotel chains having laid up their expansion plans. The initiatives announced by the new government, including those related to evisas and specific funds for developing tourist circuits, would lead to good business.

Information Technology (IT) has made possible information access at gigabit speeds. It has created a level playing field among nations and has a positive impact on the lives of millions. India is one of the fastest-growing IT services markets in the World. The Indian IT and Information Technology enabled Services (ITES) sectors go hand-in-hand in every aspect. The industry has not only transformed India's image on the global platform, but also fuelled economic growth by energizing the higher education sector. The industry has employed almost 10 million Indians and has hence, contributed significantly to social transformation in the country.

The Indian Media and Entertainment (M&E) industry is a sunrise sector for the economy and is making high growth strides. The media and entertainment industry in India consists of many different segments under its folds such as television, print, and films. It also includes smaller segments like radio, music, OOH, animation, gaming and visual effects (VFX) and Internet advertising.
Proving its resilience to the World, the Indian M&E sector is on the cusp of a strong phase of growth, backed by rising consumer payments and advertising revenues across all sectors. The industry has been largely driven by increasing digitization and higher internet usage over the last decade. Recent statistics and developments pertaining to the sector are discussed hereafter.

Greetings from Suryadatta Institute of Management and Mass Communication PGDM

As the directives received from the competent authorities our campus is closed due to the breakout of COVID 19 (CORONA VIRUS).

We trust that your family and yourself are safe and are taking necessary precautions against the unfortunate spread of COVID 19.

We are always reachable for all our stakeholders and would like to assist you in all possible ways that we can.

In view of COVID 19, Currently GD/PI for PGDM is conducted through telephonic calls, Video Conferencing, Whatsapp video calls or other virtual modes. Interested candidates should sms your name, course, State and city, course interested in on 8956932418 / 9763266829

For Career Guidance SMS your name, city, mobile number and the course for which guidance is required to 9763266829.

For Admin and Purchase

You may also approach: